The Myth of Control 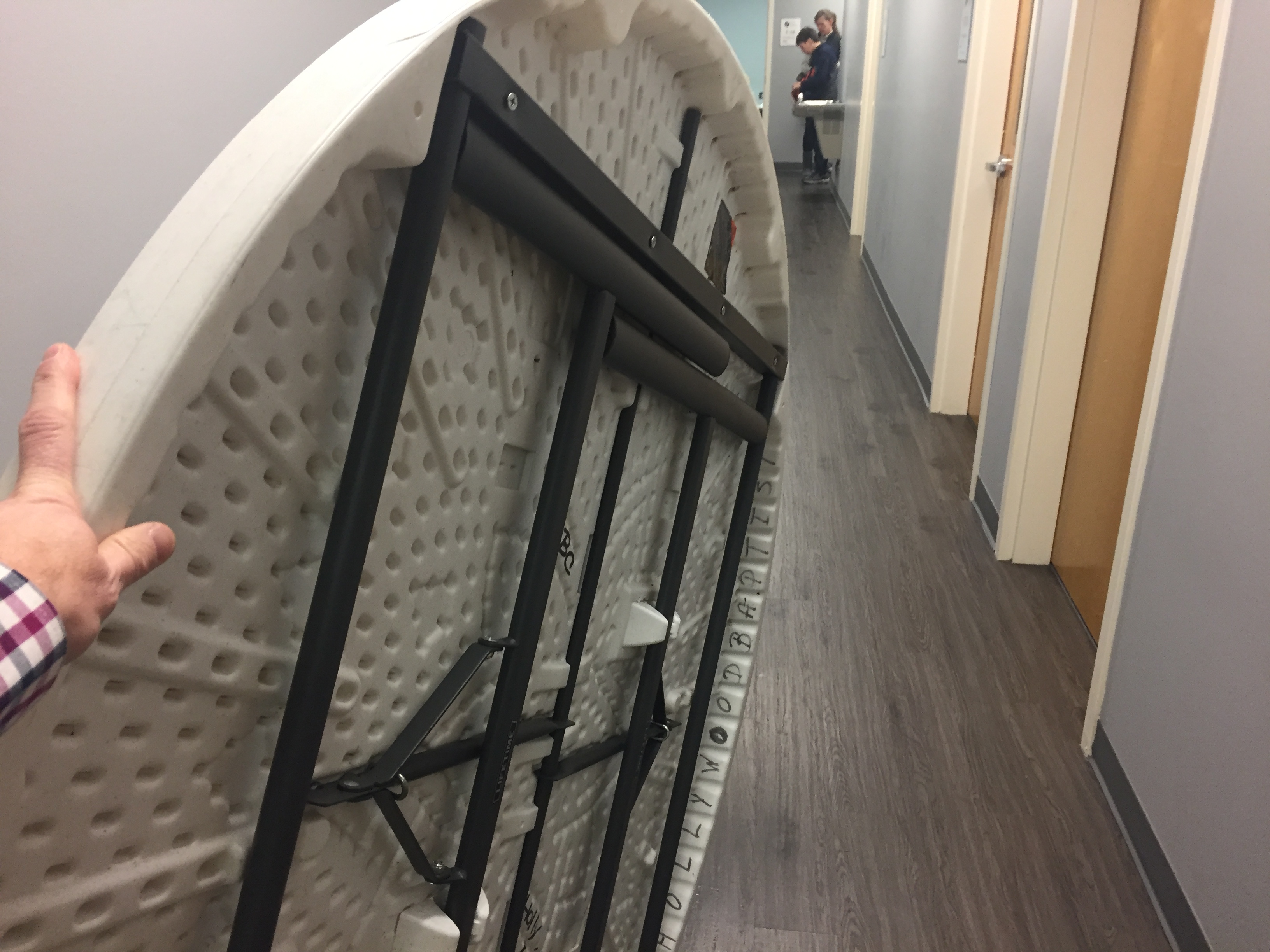 This past week at our at our homeschool community group I was helping put up tables from our assembly room.  The tables are round and after folding the legs, we have to roll them down a long hallway to a storage area.  I simply stood the table on its side and gave it a good push and it started rolling down the hallway.  Other than a few minor corrections to keep it on course and a few additional pushes, I barely had to touch the table while it rolled down the hall from its own momentum.  This is basic physics, Newton’s first law: 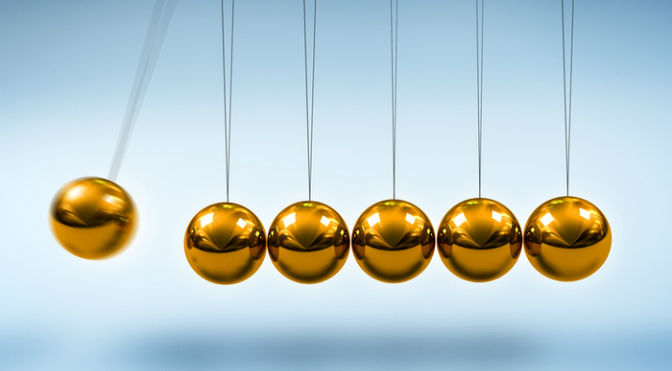 “An object at rest stays at rest and an object in motion stays in motion with the same speed and in the same direction unless acted upon by an unbalanced force.”

As leaders, we sometimes think that the more control we have, the better things will go, when in fact, control often has quite the opposite effect.  In the words of Dr. Tim Elmore, “Control is a myth. None of us are actually ‘in control.'”  In my book Leader Farming, I give some practical tools to help leaders make the shift from being a “command and control” style leader to a leader that allows people the freedom to grow and become the best version of themselves.

My primary role as the leader is to set the conditions for growth, to prepare the soil (establish the culture) and plant the seeds.  It’s my job to set things in motion, then step back and let them roll.  Yes, I will offer correction if they get off course, but I will not attempt to control their entire journey.

One recent example of this is the creation of Lean6Ninja.  My goal was to get my team to start thinking lean.  While the subject of “lean” is beyond the scope of this blog (watch this video if you want to learn more), this idea has set in motion a culture of continuous improvement inside my organization.   A lean culture thrives on the ideas of team members and is the opposite of an organization that runs with “top-down” control.  Remember, control is a myth and your attempt to exert it, is most likely having the opposite of the desired effect.

Three ways to partner with us:

A business or Individual who gives a financial donation of $220 or more. Click here to view partnership levels

A business who would like to offer WinShape Camp as an employee benefit, covering all or part of the tuition for children of employees. Click Here to partner with us

Churches who would like to encourage their children to attend camp. Churches can elect to provide full or partial scholarships to children of members. A special code will be given to the church to give to members and the church will be invoiced after camp by WinShape. Click Here to partner with us

We love our WinShape Camp volunteers! Camp just wouldn’t be the same without you. If you would like to be a volunteer with WinShape Camp – Polk County we will require you to follow the link below and register with WinShape Camps. We will contact only those that officially register with the corporate office of WinShape (via the link below) and then give you the options of volunteer positions to choose from. There are numerous positions and we are trying to recruit 50 volunteers to fill those roles. We understand that many volunteers have a limited amount of time so we’d be glad to work with your scheduling requirements.

The youngest age allowed for volunteers will be students that have completed 9th grade and will be going into 10th.

Please note: We currently do not have daycare facilities available for children that are not old enough to attend Winshape Camp.

Steve Dennis is the founder of Motivation Unlimited, an organization created to inspire positive change in the lives of people—personally and professionally. Steve is a member of the John Maxwell Team, an elite group of certified coaches and communicators mentored by renowned leadership expert and New York Times best-selling author John Maxwell. As a John Maxwell Certified Coach, Teacher and Speaker, Steve can offer you workshops, seminars, keynote speaking, and coaching, aiding your personal and professional growth through study and practical application of John’s proven leadership methods. Working together, Steve will move you and/or your team or organization in the desired direction to reach your goals.

In addition to his Certification with The Maxwell Team, Steve is also a graduate of Jack Canfield’s “Train the Trainer” Program as well as The Dave Ramsey Financial Peace University. Steve is a member of the American Association of Christian Counselors and received a Doctorate of Biblical Studies from Ministry International Institute.

Steve trains and motivates with an emphasis on strengthening leaders and helping them to maximize their skills and effectiveness and identify the potential in the individual.

Ned is a retired Air Force Lt Colonel with an Ed.D. in sport and performance psychology. For over 30 years, his parents prayed General McArthur’s prayer, “Build Me A Son” emphasizing this verse: “Lead him not in the path of ease and comfort, but under the stress and spur of difficulties and challenge. Here let him learn to stand up in the storm.” Ned weathered the storms of war, earning the Distinguished Flying Cross for Valor—the answered prayer; thereby, proving to himself that he was “brave enough to face himself when afraid” and “humble in victory.” He believes in a person-centered, active learning approach that seeks to advance each person individually, allowing for creativity, character strengths, and interest to guide their path with intrinsic motivation. He will demonstrate how to incorporate Coach John Wooden’s Pyramid of Success to lead, guide, and mentor others in any endeavor to achieve performance excellence.

Alan’s life vision is to help others become all that they have the potential to be. This is founded on the premise that everyone has moments of “awesome” in their lives, when we are truly living up to our full potential and fully utilizing our God-given talents. His goal is to develop people personally, professionally, and spiritually, helping them become “more awesome, more often.” He has seen this happen through his professional experience alongside corporations, ministries, small businesses, and non-profit organizations, both close to his Georgia home and as far away as Spain, Thailand, and China.

In addition to Alan’s work through LEAD Workforce Consulting (www.leadworkforce.com), he also works full-time as a business professor at Point University, where he invests his talents and business experiences into developing the next generation of business leaders. He teaches primarily in the fields of management, leadership, continuous improvement (Six Sigma), organizational change and economics. He also serves on the boards of several organizations.

Alan received his BS in Management from the Georgia Institute of Technology, his MBA from Auburn University, and his Doctorate in Business Administration from George Fox University. In his free time, Alan enjoys hunting and boating. He resides in LaGrange, Georgia, with his wife, Allison, and two children, Aida and Cecil.

He was Eagle Scout of the Nation in 1995, graduated from the United States Military Academy at West Point and served his country as an Airborne Ranger Infantry Officer. He has started multiple companies and been featured in Newsweek Magazine and on Good Morning America. He married his high school sweetheart and they homeschool their seven children on their family farm where he grew up. His varied interests include studying leadership and entrepreneurship, farming, riding his Harley, working on old cars with his son and dad, camping and spending time with his family.

He is the Owner/Operator of a Chick-fil-A franchise in Rockmart, Georgia where he is very involved in his community. 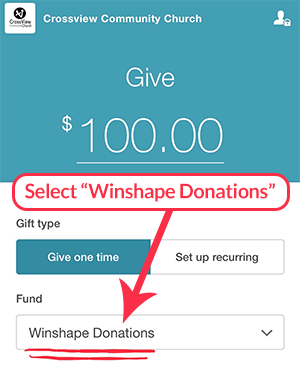 OR – you can mail a check payable to “WinShape Polk” and send it to the address below:

Please complete the form below to partner with us:

Please complete the form below to partner with us:

Doug Grady has helped thousands of people reclaim their focus and grow toward their potential through choice and discipline. Doug is a TEDx speaker and highly requested keynote speaker. He is the author of The Ripple Effect which has been widely read and highly endorsed. He also developed the life changing program 40 Days of FOCUS.

Doug gives a significant portion of his time and money to local and global causes. He has been on several mission trips, including to Ecuador where he was part of a twelve-man team building homes for the poorest of the poor.

His companies, writings, trainings, and music are designed with one purpose: to help people reach their God-given potential.

Thomas Earp is an organizational and human behavior specialist with exceptional experience as a strategic leader building and maintaining successful teams in a variety of organizational settings. He has an M.A. in Communication, and has been involved in leadership, team and organizational development and effectiveness for over 30 years. His professional experience ranges from business owner, educator, consultant, trainer and coach. Thomas has extensive experience in developing high-impact leaders, high-performing teams, and engaged organizational cultures. He is a strategic leader with exceptional experience building and maintaining successful programs in higher education and private industry environments, specializing in organizational development and effectiveness. Thomas works with leaders, teams and organizations as a consultant, trainer and coach and has a proven ability to help them discover, identify, explore and optimize their strengths and maximize their potential to transform their performance and achieve their desired results.

Every great story is a journey. Every journey begins with a question – what do I want? Understand that question and you have some idea of where you are going and how you are going to get there.

With a background in art, music, education, creative thought and over 35 years’ experience in business, Bing enjoys the challenge of helping people see creative solutions to fix things that bug them. He loves to draw out potential and help others live up to their potential.

Bing has served as a top performing Field Consultant and Franchisee with Chick-fil-A, where he had a reputation for innovation, creativity, team facilitation and great friendships. His Chick-fil-A restaurant in Boone, NC was known as “Boone’s best place to work and eat!” – his team won numerous awards. He ran his business by developing a team of leaders who worked together to get results.

He now owns Peake Coaching & Consulting where he uses climbing analogies and creative thinking to help leaders and teams reach their peak.

Bing lives in Atlanta Georgia where he enjoys time with his sister and mom. His father, long time Chick-fil-A Franchisee passed away in 2018 after a long bout with dementia. He as two grown children. He enjoys playing drums, guitar and ukulele. He also enjoys bike riding with friends and just having fun with friends and family.

Jared Stump is a published author, speaker, and communications expert who is highly versed in copywriting, digital marketing and social media management. Having consistently worked in these arenas since 2008, he understands both changing trends and timeless methods, and seeks to integrate both into his work. Jared serves as the “Chief Story Teller” (social media director) for Chick-fil-A Rockmart and the Executive Director for Life Impact Ministries. He has also started two small businesses to help seasoned and veteran authors produce high-quality books without the backing of a major publisher. You can connect with Jared on Instagram or Twitter: @jaredstump.

Andy Christiansen is an author, speaker and coach. His passion is to inspire and equip millennial leaders or those who lead millennials and centennials, to embrace a new, more profitable style of leadership focused on developing great people as a prerequisite for making great teams and organizations. He is about helping leaders build great workplace cultures, work 3.0 as he refers to it and how they themselves can become curators of culture. To find out more about Andy, visit www.andychristiansen.com, leadershipbd.com or capacity7.com.